Given the sharp reduction in the sulphur content of marine fuel mandated by the IMO on a global level from 2020, the future of the bunker ‘workhorse’, heavy fuel oil, is less than clear cut. However, as Neil Camarta of Field Upgrading explains, the company’s DSU desulphurisation process directly produces low sulphur fuel from bottom of the barrel residue or high sulphur fuel oil.

Global regulations around marine fuel sulphur content and emissions in the international shipping sector are being tightened, and industry will need to respond quickly to meet them. On 1 January 2020, global sulphur limits will decrease to 0.5% m/m, as mandated by the International Maritime Organization (IMO). The bulk of present bunker fuel demand is met by high sulphur residual fuel oil. However, with the change in sulphur specifications, future demand will need to be met by other low sulphur fuels, such as marine distillates, diesel or low sulphur fuel oil.

At Field Upgrading Ltd, we are taking the bottom of the barrel and creating a more environmentally responsible fuel to help the industry meet its new obligations. We are engaged in commercialising a sulphur removal technology, called DSU, which has been shown to remove sulphur, producing a marketable low sulphur bunker using bitumen, vacuum residue or other sour heavy oils as a feedstock. Using DSU, Field Upgrading is providing the maritime industry with an opportunity to utilise the bottom of the barrel or existing high sulphur fuel oil and create

a cleaner, safer, low cost, low sulphur fuel. All the ships that sail upon the sea burn about 4 million barrels per day of 3.5% sulphur fuel oil. The world’s 15 largest ships are said to emit more pollution in the form of sulphur dioxide than all the cars in the world put together. When the IMO declared that ships must be running, not on 3.5% sulphur, but 0.5% sulphur fuel by the year 2020, Field Upgrading focused on the work it had done in heavy oil upgrading technology to seize this unique opportunity. Field’s DSU oil is fully compliant with the sulphur regulations. DSU removes the sulphur, along with harmful metals, such as vanadium, thus making a low sulphur bunker fuel. It is a cost and process efficient way to respond to these new IMO marine fuel regulations, and it also means no more large piles of coke or asphaltenes being left behind awaiting disposal or handling. We believe DSU compares favourably with other processes, such as delayed coking and hydrodesulphurisation (HDS). It has 50% lower capital costs, and the DSU process is simple and scalable to t into sea containersized process skids so it can be

shipped anywhere in the world and deployed quickly within constrained eld locations. The robustness of the margins of the DSU process is also worth noting. Even with the low crude oil prices seen in January 2016 (down to $25 a barrel for Brent crude oil), estimated DSU margins remained well above the breakeven point of $20 per barrel (covering both a capital return at 10% internal rate of return (IRR) plus operating costs). Capital costs are under $300 million for a 10,000 barrels per day (b/d) plant with operating costs estimated to be in the range of $10 a barrel (bbl). DSU uses molten sodium to significantly reduce the levels of sulphur, metals, acid (TAN) and asphaltenes (by conversion – not removal), keeping all the liquid volume and energy, thus increasing the efficient use of the full barrel of oil. DSU involves mixing elemental molten sodium and relatively small quantities of hydrogen with a sour feedstock to produce an upgraded heavy oil product. In fact, it can be customised to specifically meet applicable International Organization for Standardization (ISO) marine fuel specifications.

The resultant DSU product from any heavy feedstock containing sulphur has:

Significantly lower sulphur specifications for residual fuel oils are both in place and on the horizon for the shipping industry. The high sulphur residue market is shrinking and a ‘bottoms bubble’ is emerging. To meet these new specifications, refiners will need to use more low sulphur diesel as blendstock for making marine bunker fuel, and a lot less highsulphur heavy bottom streams like vacuum residue. This will depress the price of refinery bottoms, the ideal feedstock for the DSU process. Removing sulphur from bottoms is challenging and can be expensive for conventional hydro-processing, but DSU is a cost-effective solution for bottoms desulphurisation.

Shipping companies are looking at alternatives, from on-ship scrubbers to LNG retrofits, all of which are very expensive. According to Lloyd’s Register and University College London, over 75% of future demand is expected to be met by residual fuel oils.

In all instances, the oil industry is faced

with the issue of determining what to do with their high sulphur production. Refiners have the option to destroy the vacuum residue by adding residue destruction processing capacity (e.g., delayed coking units) or treating the vacuum residue to reduce the sulphur to 0.5% with some form of residue hydrotreating.

Conventional residue hydrotreating processes have high capital costs, high catalyst consumption and high hydrogen consumption, making them economically unattractive in many applications. Shell Global Solutions has commented that, ‘These days, the sulphur content in crude oil has more than doubled while product specifications have been reduced by several orders of magnitude…Desulphurisation of marine fuel is one of the hardest technical and commercial challenges that refinery operators have ever faced. Our research and development efforts are exploring both low-sulphur fuels and end-of-pipe solutions. For the vessel operators, meeting the new emissions standards may involve a combined solution.’

At Field Upgrading, we believe the DSU process has three clear advantages over conventional desulphurisation technologies:

The DSU process has a very simple process line-up – reactor, separation, and sodium recovery. By contrast, conventional processes for removing sulphur from heavy oil are significantly more complex, requiring additional processing units such as cokers, hydrotreaters, sulphur plants and catalyst handling. As a result, the DSU process requires less than half the major equipment – which is the key driver for capital cost. At the same time, the DSU process is cheaper to operate since no catalyst is required and far less energy and hydrogen is involved.

Conventional desulphurisation processes must be big to be economic. Coker and hydrotreating units, for example, must typically be larger than 100,000 b/d to get the required economy of scale. In contrast, the DSU process lends itself to being economic on a much smaller scale. The sodium/sulphur reaction is very fast so the reactor is relatively small. One 10,000 b/d DSU plant would likely be comprised of 40 to 60 sea container-sized skids that can be pre-fabricated and delivered to site to minimise low-productivity work in the field. The core processing units would have a footprint of only approximately 2.4 hectares or 6 acres.

The DSU process has demonstrated the ability to reduce the sulphur content of bunker fuel, helping refineries maintain a market for heavy bottoms and for the shipping industry, meeting obligations under the new marine shipping fuel regulations. By utilising DSU to reduce the sulphur content of fuel, its density is significantly decreased and its viscosity is improved.

Test results show that feedstocks such vacuum residue with sulphur content over 6% can be reduced to less than 0.5% sulphur ISO specification. The blended DSU product is a cleaner burning fuel. By using DSU technology, the sulphur and metal content of fuel can be reduced by more than 90%. The process will ensure that a high yield is maintained, in the 90%-100% liquid volume range, with no coke piles.

The only by-products from the DSU process are the sulphur and metals that are removed from the bunker fuel. Marine fuels tend to have much higher viscosity levels compared to traditional fuels, negatively impacting fuel consumption and economy. By using DSU to process fuel, viscosity is reduced by 100-1,000 times. The economics are favourable to produce low and very low sulphur bunker fuels using DSU. The process has been demonstrated to remove sulphur effectively from feedstocks with a wide range of API Gravity, including very heavy oil. The DSU technology has been extensively proven across a variety of feedstocks. From Alberta bitumen and refinery bottoms to Columbia heavy oils, we continue to test samples provided by companies interested in how the DSU technology could work for them. After extensive lab work to demonstrate the viability of this technology, Field Upgrading built a 10 b/d pilot plant in Fort Saskatchewan, Alberta, Canada. In operation since 2015, this plant has confirmed our earlier lab results and we have moved on to the next phase: a larger scale demonstration plant. Scheduled to be ready in 2019, we are currently building a modular 2,500 b/d demonstration facility, called CLEANSEAS. Created using an ‘engineering once – build many’ template, CLEANSEAS is a small, compact and modular design that can be transported and installed anywhere. This 2,500 barrel b/d plant will be built in sea container- sized process skids. Future plants can be built ‘plug and play’ style from the same basic process skids for a fast roll-out of the technology. If successful, the demonstration plant will quickly be expanded to a 10,000 b/d facility. 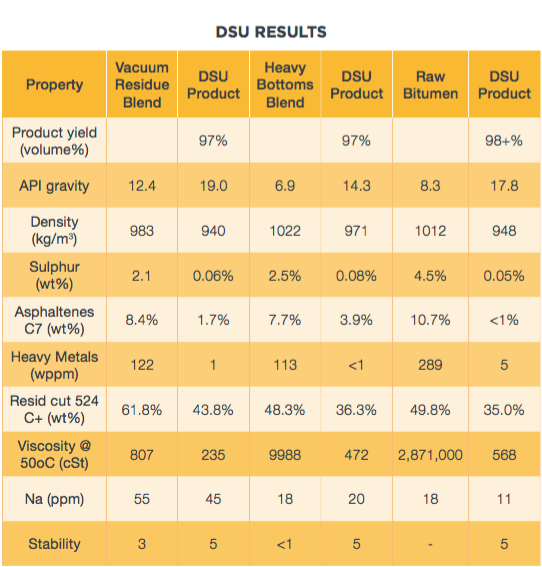 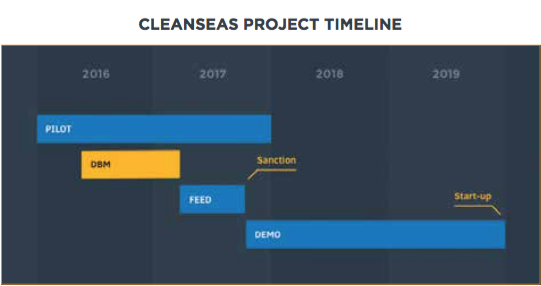